Home » Accounting Information for Deacision Making » The Concept of Materiality

The Concept of Materiality Accounting Help

Another generally accepted accounting principle also plays a major role in the making_entries-the concept of materiallty. The term materiality refers to the relative importance of an item or an event. An item is considered material if kuowledge of the item might reasonably influence the decisions of users of financial statements.
Accountants must be sure that all material items are properly reported in financial statements.

However, the financial reporting process should be cost-~neclil’e-that is, the value of the information should exceed the cost of its preparation. By definition. the accounting treatment accorded to immaterial items is of little or 110 consequence to decision makers.

Therefore, accountants do not waste time accounting fur immaterial items: these items may be handled in the easiest 011[7 most convenient manner.

In summary, the concept of materiality allows accountants to use estimated amounts and even to ignore other accounting principles if the results of these actions do not have an important impact on the financial statements, Materiality is one of the most important generally accepted accounting principles; you will encounter applications of this concept throughout the study of accounting.

The concept of materiality enables accountants to shorten and simplify the process of making adjusting entries in several ways, For
example:

1. Businesses purchase many assets that have a very low cost or that will be consumed quickly in business operations, Examples include wastebaskets, Iightbulbs. and janitorial supplies. The materiality concept permits charging such purchases directly to expense accounts, rather than to asset accounts. This treatment conveniently eliminates the need for an adjusting entry at the end of the period to transfer a portion of these costs from an asset.account to expense. This accounting shortcut is acceptable as long as the cost of the unused items on hand at the end of the period is . immaterial

2. Some expenses, such as telephone bills and utility bills, may be charged to expense as the bills are paid, rather than as the services are used. Technically this treatment violates the matching principle. However, accounting for utility bills on a cash basis is very convenient, as the .monthly cost of utility service is not even known until the’ utillty bill is received. Under this cash basis approach, one month’s utility bill is charged to expense each month. Although the bill cha-sed to expense is actually the prior month’s bill, the resulting “error” in the financial statements is not likely to be material.

3. Adjusting entries to accrue unrecorded expenses or unrecorded revenue may be ignored ..if the dollar amounts are immaterial. . . .

4. If the amount of error is not likely to be material, adjusting entries may be based on estimates. For example, on page .149 we illustrate an adjusting entry allocatingpart or the $1.800 balance in the Supplies account to expense. The amount of supplies used during the period ($600) was based on an estimate of the supplies still on hand ($1,200). This $1,200 estimate is an “educated guess”; no one actually counts all of the shop supplies on hand and looks up. their cost. The adjusting entry recording accrued wages payable also was based on an estimate, not a detailed calculation.

Materlality Is a Matter of Professional Judgment

Whether or not a specific item or event is material is a matter of professional judgment, 111 making these judgments, accountants consider several factors. First. what ‘constitutes a material amount varies with the size of-the organization. Fer example, a $1.000 expenditure may be material in relation to the financial s.atements of a small business but not to the .statementsof a’ large corporation such as General Electl’k. 7 There are no official rules as to what constitutes a material amount; but most accountants would consider amounts of Jess than 2% or 3% of net income to be immaterial, unless. there were other f~cto~s’to consider. . One such other factor is tJ{ecumLllati~e effect of numerous immaterial events. Each of a dozen items may be immaterial when considered by itself. When .viewed together, however, the combined effect of aU twelve items may be material. Finally, materiality depends on the nature of the item, as well as its dollar amount.  Assume, for example, that several managers’ systematically have been stealing money from the company that they manage. Stockholders probably would consider this fact important even if the ‘dollar amounts. were small in relation to the company’s total resources. 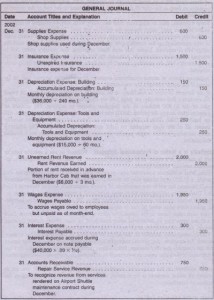 Adjusting entries are recorded only at the end of the period

Posted on November 21, 2015 in Accounting Information for Deacision Making

Dividends in Arrears
The Accounting Cycle Preparing an Annual Report