explained the need for businesses to make a complete physical count of the merchandise on hand at least once a year. The primary reason for this procedure of “taking inventory” is to adjust the perpetual inventory records for unrecorded shrink- Explain the need for taking a age losses, such as theft, spoilage, or breakage. 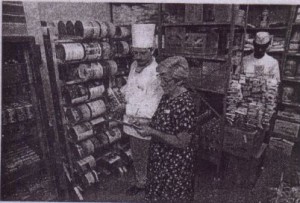 If shrinkage losses are small, the costs removed from inventory may be charge) directly to the Cost of Goods Sold account. If these losses are material in amount, the offsetting debit should be entered in a special toss account, such as Inventory Shrinkage Losses. In the income statement, a loss account is deducted from revenue in the same manner as an expense account.

LCM and Other Write Downs of Inventory

In addition to shrinkage losses, the value of inventory may decline because theme merchandise  become’ obsolete or is unsalable for other reasons. Oriventory has become obsolete or is otherwise unsulublc, .its carrying value in the accounting records should be written dOl1’1/ tu zero (01′ to its ,”scrap value,” if any). A write-down of inventory ~e~ duces both the carrying value of the inventory and the net income of the current period. The reduction in income is handled in the same manner as a shrinkage loss. If the write down is relatively small, the loss is debited directly to the Cost of Goods Sold account Ir the write-down is material tn {/II/OWlf, however. it is charged to a special loss account, perhaps entitled Luss from Write-Down of Inventory

The Year-End Cutoff of Transactions

Making a proper cutoff of transactions is an essential step in the preparation of reliable financial statements. A proper cutoff simply means that the transactions occurring near year-end are recorded in the right accounting period

Matching Revenue and the Cost of Goods Sold

Accountants must determine that both the sales revenue and the cost of goods sold relating to sales transactions occurring near year-end are recorded in the same accounting period. Otherwise. the revenues and expenses from these transactions will not be properly matched in the company’s income statements.

The only item in this computation tha: is kept continuously up-to-date in the accounting records is the Purchases account. The amounts of inventory at the beginning and end of the year are determined by annual physical counts.

In our discussion of perpetual inventory systems, we have emphasized the costs that are transferred from inventory to the cost of goods s~ld. In a periodic system, the emphasis shift” to determining the costs that should be assigned to inventory at the end of the period.

To illustrate, assume that The Kitchen Counter, a retail store, uses a periodic inventory system. The year-end physical inventory indicates that 12 units of a particular model food processor .are on hand. Purchases of these food processors during the year are as follows:

This schedule shows that 30 food processos were available for sale in the course of the year, of which 12 are still on hand. Thus 18 of these food processors apparently were sold.” We will now use these data to determine the cost of the year-end inventory and the cost of goods sold using the specific identification method and the average-cost, FIFO, and LIFO flow assumptions

Receiving the Maximum Tax Benefit from the UFO Method

Many companies that use LIFO in a perpetual inventory system restate their year-end inventory at the costs indicated by the periodic UFO costing procedures  above. This restatement is accomplished by either debiting or crediting the Inventory account and making an offsetting entry to the Cost of Goods Sold account.

Let us briefly explain why applying LIFO at year-end may result in a lower ‘valuation of inventory than does applying LIFO on a perpetual basis. Consider the last purchase in our example. This purchase of five food processors was made on December 31, at the relatively high unit cost of $130. Assuming these units were not sold prior to year end. they would be included in the year-end inventory in perpetual inventory records. even if these records were maintained on a  basis. When the ending inventory is priced using “periodic LIFO:’ however.this last-minute purchase is not included in inventory. but rather in. the cost of goods sold

Pricing the Year-End Inventory by Computer

If purchase records are maintained by computer, the computer can compute the value of the ending inventory automatically using any of the flow assumptions that have been discussed. The computer operator must only enter the number of units on hand at year-end. A computer also can apply the specific identification method, but the computer operator then must enter an identification number for each unit in the ending inventory. This is one reason why the specific identification method usually is not used for inventories consisting of a large number of low cost items

Importance of an Accurate Valuation of Inventory

The most important current assets in the balance sheets of most companies are cash, accounts receivable, and inventory. Of these assets, inventory ‘often is the largest. It also is the only current asset for which alternative valuation methods are considered acceptable.

Because Of the relatively large size of inventory, and the fact that products may be’ stored in many different locations, an error in inventory valuation may not be readily apparent.

But in many cases, even a small error in the valuation of inventory may have a material effect 01} net income. Therefore, care should be taken in counting and pricing the inventory at year-end

An error in the valuation of inventory  affect several balance sheet measurements, including current assets, the current ratio (the ratio of current’ assets to current liabilities), and total owners’ equity. It also will affect key figures in the income statement, including the cost of goods sold, gross profit, and net income. And remember that the ending inventory of one year is the beginning inventory of the next. Thus an error in inventory valuation will carry over into the income statement of the following year.

Effects of an Error in Valuing Ending Inventory

To illustrate, assume that some items of merchandise in a company’s inventory are overlooked during the year-end physical count. As a result of this error, the ending inventory will be understated. The costs of the uncounted merchandise erroneously will be transferred out of the Inventory account and included in the cost of goods-sold ..This overstatement of the cost of goods sold, in turn, results in an understatement of gross profit and net income

Assume that the ending inventory in 2000 is understated by $10,000. As we have described above, the cost of goods sold in 2000 will be overstated by this amount, and both gross profit and net income will be understated

Notice that the original error has exactly the opposite effects on the net incomes of the two successive years. Net income was understated by the amount of the error in 2000 and overstated by the same amount in 2001. For this reason, inventory errors are said to be -“counterbalancing” or “self-correcting” over a two-year period.

The fact that offsetting errors occur in the financial statements of two successive years does not lessen the consequences of errors in inventory valuation. Rather, it exaggerates the misleading effects of the error on trends in the company’s performance from one. year to the next. 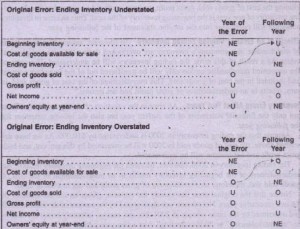 Techniques for Estimating the Cost of Goods Sold and the Ending Inventory Taking a physical inventory every month would be very expensive and time-consuming.

Therefore. if a business using a perioctc inventory system is to prepare monthly or quarterly financial statements, it usually estimates the amounts of its inventory and cost of goods sold. One approach to making these estimates is called the gross profit method; another-used primarily by retail stores-is the retail method

The retail method of estimating inventory and the cost of goods sold is quite similar to the gross profit method. The basic difference is that the retail method is based on the cost ratio of the current period, rather than that of the prior year.

To determine the cost ratio of the current period, the business must keep track of both the cost of all goods available fur sale during the period and the retail sales prices assigned to these goods. To illustrate, assume that during June the cost of goods available for sale in Tennis Gallery totaled $45,000. The store had offered this merchandise for sale to its customers at retail prices totaling $100,000. The cost ratio in June was 45% ($45,000 -;- $100,000). This cost ratio is used to estimate the monthly cost of goods sold and the month-end inventory by the same procedures as are applied under the gross profit method

Many retail stores also use their current cost ratio as a quick method of pricing the inventory counted at year-end. In a retail store, the retail sales price is clearly marked on the merchandise. Therefore, employees quickly can determine the retail price of the ending inventory. This retail price may be reduced to a close approximation of cost simply by multiplying by the cost ratio.

“Textbook” Inventory Systems Can Be Modified … and They Often Are

In this chapter we have described the basic characteristics of the most common inventory systems. In practice, businesses often modify these systems to. suit their particular needs. Some’ businesses also use different inventory systems for different purposes. We described one modification in Chapter 5-a company that maintains very little inventory may simply charge (debit) all purchases directly to the cost of goods sold. Another common modification is to maintain perpetual inventory records showing only the quantities of merchandise bought and ‘sold, with no dollar amounts. Such systems require less record keeping than a full-blown perpetual system, and they still provide mane agement with useful information about sales and inventories. To generate the dollar amounts needed in financial statements and tax returns, these companies might use the gross profit method, the retail method, or a periodic inventory system.

Businesses such as restaurants often update their inventory records by physically counting products on a daily or weekly basis. In effect, they .use frequent periodic counts as the basis for maintaining a perpetual inventory system. In summary, real-world inventory systems often differ from the illustrations in a text: book. But the underlying principles remain much the same.