The types of . discussed up to this point are encountered in all types of business organizations-large and small. We will now address some special types of’ liabilities that are found primarily in the financial statements of large, publicly owned corporations.

Financially sound corporations may arrange limited amounts of long-term financing by  issuing notes payable to banks or to insurance companies. But to finance a large project, such as developing an oil field or purchasing a controlling interest in the capital stock of another company, a corporation may need more capital than a~y.’single lender can supply. When a corporation needs to raise large amounts of long-term capital-perhaps 50, 100, or 500 million. dollars (or more)-it generally sells additional shares of capital stock or issues bonds payable. What Are Bonds? The issuance of bonds payable is technique for splitting a very large loan into many transferable units, called bonds. Each bond represents a long-term. interest-bearing note payable, usually in the face amount (or par value) of $1,000,or some multiple of $1,000.

The bonds are ‘sold to the investing public, enabling many different investors (bondholders) to participate in the loan.  Bonds usually every long-term notes, urinating in perhaps 30 or 40 years. The bonds are transferable, however, so individual bondholders may sell their bonds to other, investors, at any time. Most bonds call for semiannual interest payments to the bondholders, with interest computed at a specified contract rate throughout the life of the bond. Thus investors often describe’ bonds as “fixed-income” investments.  An example of a corporate bond issue is the 8112% bonds of Pacific Bell (a Pacific Telekinesis company, known a{Campbell), due August 15, 2031. Interest on these bonds is payable semiannually on February 15 and August 15′.With this bond issue, Campbell borrowed $225 million by issuing 225,000 ‘bonds of $1,000 each.Campbell did not actually print and issue 225,000 separate notes payable.

Each bondholder is issued a single bond certificate indicating the number of bonds purchased. An illustration of a bond certificate appears below. This specimen certificate is in the face amount of $25,000 and, therefore, represents ownership of 25 bonds. Investors such as mutual funds, banks, and insurance companies often buy thousands of bonds at one time The Issuance of Bonds Payable When bonds are issued; the corporation caustically  the services of an investment banking firm, called an underwriter; The underwriter guarantees the issuing corporation a specific price for the entire bond issue and makes a profit by selling the bonds to the investing public at a higher price. The corporation 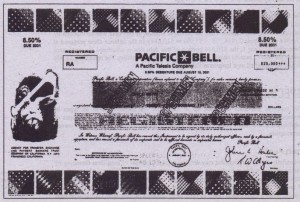 records the issuance of the bonds at the net amount received from the underwriter. The use of an underwriter assures the corporation that the entire bond issue, will be sold without delay and that the entire amount of the proceeds will be available at a specific date Transfer ability of Bonds Corporate bonds, like capital stocks, are traded daily on organized securities exchanges, such as the New York Bond Exchange. The holders of a 25,-year bond issue need not wait 2S years to convert their investment, into cash. By placing a telephone call to a broker, an investor may sell bonds within a matter of minutes at the going market price.

This quality of liquidity is one of the most attractive features of an investment in corporate bonds, Quoted Market Prices Bond prices are quoted as a percentage of their fate value or maturity value, which is usually $1,000. The maturity value is the amount the issuing company must pay to redeem the bond at the date it matures (becomes due). A $1,000 bond quoted at 102 would therefore have a market price of $1,020 (102% of $1;000). Bond prices are quoted at the nearest one-eighth of a percentage point. The following line from the financial page of a daily newspaper summarizes the previous day’s trading in bonds of Sears, Roebuck and Company:This .llee of condensed information indicates that 245 of Sears’ 7Y’s%,-$1,000-bonds maturing in -2007 were traded during the day. The highest price is reported as 97 V2, or $975 for a bond of $1,000 face value. The lowest price was 95 V~,or $955 for .a $1,000 bond. The closi ng price (last sale of the day) was 97, or $970. This was one  point above the closing price of the previous day, an increase of $10 in the’ price of a $1,000 bond.Types of.

Bonds Bonds secured by the pledge of specific assets are called mortgage bonds. An unsecured bond is called debenture bond: its value rests on the general credit of the corporation. A debenture bond issued by a very large and strong corporation may have a higher investment rating than a secured bond issued by a corporation in less satisfactory financial condition. Bond interest is ‘paid semiannually by mailing to each bondholder a check for six months’ interest on the bonds he or she .owns,”

Almost all bonds are callable, which means that the corporation has the right to redeem the bonds in advance of the maturity date by paying a specified call price. To compensate bondholders for being forced to give. up their investments, the call price usually is somewhat higher than the face-value of the bonds.

Traditionally, bonds have appealed to conservative investors, interested primarily in a reliable income stream and in the safety of the principal that they have invested. To make a bond issue more attractive, to these investors, some corporations create a bond sinking fund, designated for repaying the bonds at maturity. At regular intervals, the corporation deposits cash into this sinking fund.

A bond sinking fund is not classified as a current asset.’because It is not available for the payment o~ current liabilities.

Such 710 recent years, corporations have issued only registered bonds, for which -interest is paid by mailing a check to the registered owners of the bonds. In past decades, some companies issued coupon bonds or bearer bonds; which had a series of redeemable coupons attached, At each interest date, the bondholder had to “clip” the coupon and present it to a bank to collect the interest. These bonds posed a considerable hazard to investors- . if the investor lost the coupon, or forgot about an interest date, he or she received no interest. In many states, issuing coupon bonds now is Noriega.