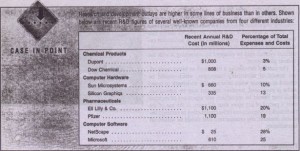 In the past, some companies treated all research and development costs as expenses in the year incurred; other companies in the same industry recorded these costs as intangible assets to be amortized over future years. This diversity of practice prevented financial statements of different companies from being comparable.

The lack of uniformity in accounting for’R&D was ended when the Financial Accounting Standards Board ruled that all research and development expenditures should be charged to expense when incurred.P This action by the FASB’ had the beneficial effect of reducing the number of alternative accounting practices and helping to make financial statements of different companies more comparable .

Mining properties, oil and gas reserves, and tracts of standing timber are leading examples of natural resources. The distinguishing characteristics of these assets are that they are physically removed from their. natural environment and are converted into inventory.

Theoretically, a coal mine might be regarded as an underground inventory of coal; however, such an inventory is certainly not a current asset. In the balance sheet, mining property and other natural resources are classified as property, plant, and equipment. Once the coal is removed from the ground, however, this coal does represent inventory.We have explained that plant assets such as buildings and equipment depreciate because of physical deterioration or obsolescence: A mine or an oil reserve does not preciate for these reasons, but it is gradually depleted as the natural resource is removed from the ground-Once all of the coal has been removed from a coal mine, for example: the mine is “fully depleted” and will be abandoned or sold for its residual value.

To illustrate the depletion of a natural resource. assume that Rainbow Minerals pays $45 million to acquire the Red Valley Mine, which is believed to contain 10 million tons of coal. The residual value of the mine after all of the coal is removed is estimated to be $5, million. The depletion that will occur over the ‘life of the mine is the original cost minus the residual value, or $40 million. This depletion will occur at the rate of $4 per ton ($40 million + 10 million tons) as the coal is removed from the mine. tf we assumethat 2 million tons are mined during the first year of operations, the entry to record the: depletion of the mine would be as follows:

Accumulated Depletion is a contra-asset account similar to the Accumulated Depreciation account; it represents the portion of the mine that has been used up (depleted) to – date. In Rainbow Mineral’s balance sheet, the Red Valley Mine now appears as follows:

The processes of depreciation, amortization, and depletion discussed in this chapter all have a common goal. That goal is to at/ocate the acquisition cost of a long-lived asset to expense over the years in which the asset contributes to revenue.

PLANT TRANSACTIONS AND THE STATEMENT OF CASH FLOWS

The cash effects’ of plant and equipment transactions are very different from the effects reported in the income statement. Cash payments for plant assets occur when those assets are purchased-or, more precisely, when ‘payment is made. Cash receipts often occur when assets are sold. (These receipts are equal to the total proceeds received from the sale, not just the amount of any gain.) Cash flows relating to acquisitions and disposals of plant assets appear in the statement of cash flows, classified as investing activities.

Most companies that prepare financial statements in conformity’ with generally accepted . accounting ·principles use the straight-line method of depreciation. However. any rational and systematic method is acceptable, as long as costs are allocated to expense in a reasonable manner. Several such methods are discussed here

The Units of Output Method

At the end of each year, the amount of depreciation to be recorded would be  by multiplying the IS-cent rate by the number of miles the truck had been driven during the year. After the truck has gone 100,000 miles, it is fully depreciated, and the depreciation program is stopped.

In many cases, units-of-output is an accelerated method. Often assets are used more extensively in the earlier years of their useful lives than in the later years.

We have explained that most businesses use MACRS in their federal income tax returns. Some small businesses also use this method in their financial statements, so they do not have to compute depreciation in several different ways. MACRS is based on the ‘dec1ining- balance method, which, in itself, is acceptable for use in financial statements. MACRS should be used in financial statements only if the designated “recovery periods” and the assumption of 110 salvage value are reasonable. Otherwise, MACRS will fail to proper!y match depreciation expense with revenue over the asset’s estimated useful life.

SYD is something of a “traditional” topic in accounting textbooks. But it is the most complex of the accelerated methods-especially when partial years are involved. And SYD is rarely used in today’s business world. As shown in the table on the following page, only 11’of the 600 corporations surveyed=-less than 2%-make any use of this method. Because of its complexity, it is even less frequently used in small businesses. SYD is seldom used for income tax purposes, because tax laws usually define allowable depreciation rates in terms of the declining-balance method. For these reasons, we will defer coverage of the mechanics of this method to later accounting courses

Depreciation methods do exist that recognize less depreciation expense in the early years of an asset’s useful life and more in the later years. Such methods may achieve a reasonable matching of depreciation expense and revenue when the plant asset is expected
to become increasingly productive over time, Utility companies, for example: may use these methods for new power plants that will be more fully utilized as the population of the area increases.

These depreciation methods are rarely used; thus we will again defer coverage to later accounting courses.

Depreciation Methods in Use: A Survey

Every year, the American Institute of Certified Public Accountants conducts a survey of 600 publicly owned companies to determine the accounting methods most widely used in financial statements

DEPRECIATION METHODS IN USE

Notice that the number of methods in use exceeds 600. This is because some companies’ use different depreciation methods for different types of assets. 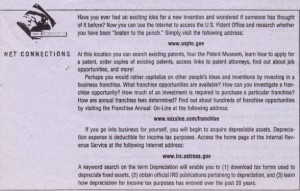