In Chapter 2, we introduced Overnight AutoService, a small auto repair shop formed on November I, 200 I. Early in jhis chapter, we journalized and posted all of Overnight’s balance sheet transactions through November 26. We intentionally chose not to illustrate how revenue’ and expense transactions were journalized and posted. However, we may safely assume that the November 30 revenue and expense transactions discussed in  were recorded properly in Overnight’s accounting system.

Overnight’s transactions-in December are described on the following pages, along with an analysis of each transaction. and illustrations of the entries made in the company’s accounting records.

Dec. 1 Paid Daily Tribune $360 cash for newspaper advertising to be tun during December. 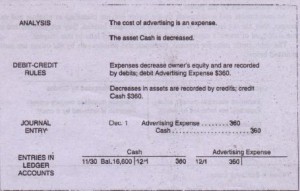 Dec. 2 Purchased radio advertising from KRAM to be aired in December. The cost. was $470. payable within 30 days 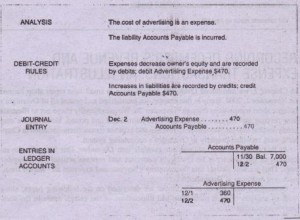 Incurred an expense to be paid later

Dec. 4 Purchased various shop supplies (such as grease. solvents, nuts, and bolts) . from NAPA Auto Parts; cost $1,400, due in 30 days. These supplies are expected to meet Overnight’s needs for three or four month 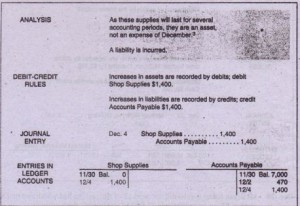 Dec. 15 Collected $4,980’cash for repairs made to vehicles of Airport Shuttle Service.

In our illustration, journal entries were shown in a very abbreviated form. The ‘actual entries made in Overnight’s journal appear below. Notice that these formal journal entries ‘ include short explanations of the transaction, which include such details as the terms of credit transactions and the names of customers and creditors. 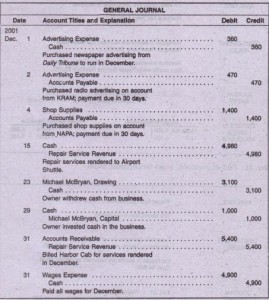 Alter the posting of these December transactions. Overnight’s ledger accounts appear as shown on the following page. To conserve space, we illustrate these aCCOUIllS in “1 He- (,P”I~C rorm. But for convenience. we show in red the December 3!’bolana of each m;- count ilJehit balances appear to the left of the account; credit balances appear to the riZhl. we do notinclude the balances withill the accounts. because some of them will he udjusted in the next step in the accounting cycle.) 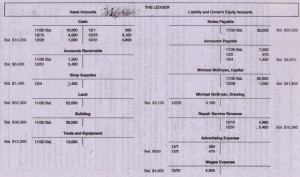 The sequence of accounting procedures used to record, classify, and summarize  counting information is often termed the accounting cycle. The accounting cycle begins with the initial recording of business transactions and concludes with the preparation of formal financial statements. The term cycle, indicates that these procedures must be repeated continuously to enablethe business to prepare new, up-to-date financial state- ments at reasonable intervals.

Thus far, we have (1) journalized (recorded) transactions and (2) posted each journal entry to appropriate ledger accounts. The steps in the cycle that remain include (3) preparing a trial balance, (4) making end-of-year adjustments, (5) preparing an adjusted trial balance, (6) preparing financial statements,”(7) journalizing and posting closing entries, and (8)’ preparing an after-closing trial balance. We will now address each of the re- ” ‘ maining aspects of the accounting cycle 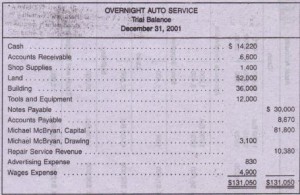 Uses and Limitations of the Trial Balance

I. Equal debits and credits have been recorded for all transactions.
2. The debit or credit balance of each account has been correctly computed.
3. The addition of the account balances in the trial balance has been correctly performed.

Posted on November 21, 2015 in The Accounting Cycle Capturing Economic Events

Stock Splits
Accounting by the Investor From theinvestor’s point of view, shares in a publicly owned