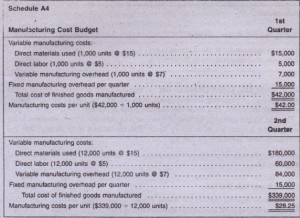 Ending Finished Goods Inventory (Schedule A5) As mentioned, NT! recently adopted a policy stating that the number of units.in finished goods inventory at the end of each quarter should amount to 10% of the ur:it sales volume anticipated in the following quarter.
Thus applying this policy in conjunction with the unit cost figures shown in Schedule .44 ending inventory estimates are determined as follows:

Operating Expense Budget (Schedule A1) NT!,s variable operating expenses amount to $7.50 per unit. Most of this cost applies to sales commissions. The company’s fixed operating expenses of $175,000 pertain primarily to the salaries of its officers. Based this information, the following operating expense budget is prepared:

NT!’s budgeted income statements are based on estimates from Schedules “I through A7. In addition; they include budgeted amounts for interest expense and income tax expense. Interest expense and income taxes are also reported on Schedules 85 and BfJ discussed later in the chapter. The following discussion explains how these figures were determined. The $36.000 note payable reported in the January I, 2000, balance sheet is the load from NTI’s president, Nancy Conrad. The note is payable in four quarterly installments of $9,000, plus accrued interest on the outstanding balance at the end of each quarter. The note’s interest rate is 12% (01-3% quarterly). Thus interest due at the end of the first ‘quarter is $1,080 ($36,000 X 3%), whereas interest due-at the end of the second quarter is only $8 ($27,000 X 3%).

Financial Budget Estimates
The estimates and data necessary to prepare the cash budget and budgeted balance sheets are called financial budget estimates. To avoid confusing these figures with the operatillg budget estimates used to prepare the budgeted income statement, we will refer to them as Schedule B1 through Schedule 88. The amounts to be used in the preparation , of NTI’s cash budget are highlighted.