Inventories and the Cost of Goods Sold Accounting Help 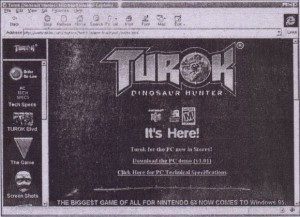 1. In a perpetual inventory system, determine the cost of goods sold using (a) specific identification, (b) average”cost, (c) FIFO, and (d) LIFO. Discuss the advantages and shortcomings of each method.
2. Explain the need for taking a physical inventory..
3. Record shrinkage losses and other year-end adjustments to inventory
4In a periodic inventory system, determine the ending inventory and the cost of goods sold using (a) specific id Elntification, (b) average cost, (c) FIFO, and (d) UFO.
5. Explain the effects on the income statement of errors in inventory valuation.
6. Estimate the cost of goods sold and ending inventory by the gross profit method and by the retail method.
7. Compute the inventory turn rate and explain its uses.
8. Define a “LIFO reserve” and explain its implications to users of financial statements

CAN DINOSAURS SAVE ACCLAIM?

A thick fog has descended. You’re wounded, and you’re out of ammo. Fierce predators circle for the kill. The scene is from Acclaim Entertainment Inc’s  video game,  Dinosaur Hunter. But it could just as easily describe the dire straits at the Glen (N.Y.) software company. Awash in inventory of poor-seiling games, Acclaim lost $221 million on revenues of $376 million in its 1996 fiscal year, ended Aug. 31 and $19 million In the first quarter of fiscal 1997″.

On the other hand there’s a reason why the N 64 has attracted so few titles: The games run on cartridges which are fast but cost 10 times as much as PlayStation compact disks to produce. Lead times
are also longer so N 64 game producers have more risk of getting stuck with costly inventory. The company has recently experienced massive inventory write-downs related to game cartridges for older Nintendo players

One of the largest current assets of any retail or wholesale business is its inventory of merchandise. In a video game store, for example inventory consists primarily of game cartridges and compact disks. The sale of these items is the main source of revenue for video game store owners. To survive, store owners must avoid .i getting
stuck” with costly products, such as those designed tor Nintendo’ 64 systems or PlayStation systems.

In this chapter, we will disuss how businesses report merchandise inventories. We will also examine how various inventory accounting methods may affect certain tlnanclal ratios

In a merchandising company, inventory consists (If all goods owned and held for sale to customers. Inventory is converted into cash within the company’s operating cycle and. therefore. is regarded current (II the balance sheet, inventory is listed immediately after accounts receivable. because it ‘” Just one step farther removed from conversion into cash than customer receivable .

THE FLOW OF INVENTORY COSTS

Inventory is an asset and most other assets-usually is shown in the balance sheet at its cost? As items are sold from this inventory their costs are removed from the balance sheet and transferred into the cost of goods sold, which is offset against sales revenue in the income statement. This flow of costs i~illustrated in the following diagram: 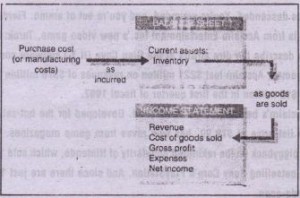 Flow of costs through financial ststements

In a perpetual inventory system, entries in the accounting records parallel this flow of costs. When merchandise is purchased, its cost (net of allowable cash discounts) is debited to the asset account Inventory. As the merchandise is sold, its cost is removed.from the Inventory account and transferred to the Cost of Goods Sold account.

The valuation of inventory and of the cost of goods sold is of critical importance to managers and to users of financial statements. In many cases, inventory is a company’s largest current asset, and -the cost of goods sold is its largest expense. These two accounts have a significant effect on the financial statement subtotals and ratios used in evaluating the solvency and profitability of the business.

Several different methods of pricing inventory and of measuring the cost of goods sold are acceptable under generally accepted accounting principles. These different methods may produce significantly different results, both in a company’s financial statements and in its income tax returns. Therefore. managers and investors alike should understand the usual effects of the different inventory valuation methods.

Which Unit Did We Sell?

Purchases of merchandise art! recorded in the same manner under all of the inventory valuation methods. The differences in these methods lie in determining which costs should be removed from the Inventory account when merchandise is sold 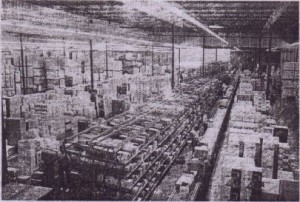 We illustrated the basic entries relating to purchases and sales of merchandise in  In that introductory discussion. however. we made a simplifying assumption: All of the units in inventory had been acquired at the same unit cost. In practice. a company often has in its inventory units 01″;1 given product that wen! acquired at different costs. Acquisition costs may vary because the units were purchased at different dates, from different suppliers. or In different quantities

When identical units of inventory have different unit costs. a question naturally arises as to which of these costs should be used in recording sales transactions

Data for an Illustration

To illustrate the alternative methods of measuring the cost of goods sold, assume that Lake Mead Electric Company sells electrical equipment and supplies. Included in the company’s inventory are five  AC-40 generators. These generators are identical; how- . ever two were purchased on January 5 at a per-unit cost of $1000 and the other three were purchased a month later. shortly after  had announced a price increase, at a per-unit cost of $1,200. These purchases are reflected in Mead’s inventory subsidiary ledger as follows

The specific identification method can be used only when the actual costs of individual units of merchandise can be determined from the accounting records. For example, each of the generators in Mead’s inventory may have an identification number, and these numbers may appear on the purchase invoices. With this identification number, Mead’s accounting department can determine whether the generator sold to Boulder Construction cost $1,000 or $1,200. The actual cost of this particular unit then is used in recording the cost of goods sold

1. Average cost. This assumption values all merchandise-units sold and units remaining in inventory-at the average per-unit cost. (In effect, the average-cost method assumes that units are withdrawn from the inventory in random order.)
2. First-in, first-out (FIFO). As the names implies, FIFO involves the assumption that goods sold are the first units that were purchased-that is, the oldest goods on hand. Thus the remaining inventory is comprised of the most recent purchases.
3. Last-in, first-out (LIFO). Under LIFO, the units sold are assumed to be those most recently acquired. The remaining inventory, therefore, is assumed to consist of the earliest purchases.

The cost flow assumption selected by a company need not correspond to the actual physical movement of the company’s merchandise. When the units of merchandise are identical (or nearly identical), it does not matter which units are delivered to the customer in a parucularc ales transaction. Therefore, in measuring the income of a business that sells units of identical merchandise, accountants consider the flow of costs to be more important than the physical flow of the merchandise

The use of a flow assumption ‘eliminates the need for separately identifying each unit sold and looking up its actual cost. Experience has shown that these flow assumptions provide useful and reliable measurements of the cost of goods sold, as long as they are applied consistently to all sales of the particular type of merchandise

On Marchi, two entries are made to record the sale of one of these generators to Boulder Construction Company. The first recognizes the revenue from this sale, and the second recognizes the cost of the goods sold. These entries follow, with the cost of goods sold measured by the average-cost method

The entry to recognize the sumo in sales revenue remains the same, regardless of the’ inventory method in use. Therefore, we .will not repeat this entry in our  of the other cost flow assumptions.)

Notice that the’ Unit Cost column for purchases still shows actual unit costs-$I,ooo and $1,200. The Unit Cost columns relating to sales and to the remaining inventory, however, show the average unit cost ($5,600 total + 5 units = $1,120). As all units are valued at this same average cost, the inventory has only one cost layer