Differences in exchange rates can create significant complexities for firms practicing global sourcing. A recent article in the Los Angeles TImes illustrated the additional problems associated with determining the cost of producing a doll using inputs from several countries. The exhibit below traces the multicountry path of a Barbie” doll from its raw materials source in·a Saudi Arabian oil field to U.S. toy stores. After the oil is relined to produce ethylene. Taiwan uses the ethylene to produce vinyl pellets that arc shipped to Dongguan in China’s Guangdong province.

At the Chinese joint-venture factory. 5.500 workers. paid between $30 and $40 per month. make the plastic doll and her clothes. However. most of the machinery and tools including the plastic mold ‘injection machines are imported from.the United States. Europe. and Japan. The molds themselves come directly from the United States. Japan contributes’ Barbie™’s nylon hair. Hong Kong manages the entire process. arranging banking and insurance. supervising exporting and importing. and overseeing transportation back to the United States. Finally. U1S, ddl mestic packaging, trucking. advertising. and other functions that employ thousands of U.S. workers results in a $)0.00 BarbieTMit your 19Ca1toy store. Muttel Inc. has indicated that the typical profit from the sale o,f a Barbie” is about $1.00. 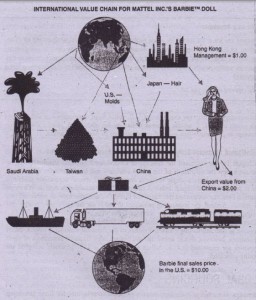 The table below illustrates the costs and exchange rate issues involved in the production of a Barble” doll. Panel A provides the currency exchange rates for the countries involved in the value chain. Panel B includes estimated-product export costs for the Mattei Inc. Barbie?” made ‘at the Meitai factory in Dongguan, China. The estimated costs in the exhibit are based on a single day’s reported exchange rates (May 30, ,997). Companies must’ choose a representative exchange rate to compute the cost buildup in their domestic currency.The information in the exhibit and associated table do not provide details about customs duties. import and export fees. multicountry tax laws, and tax treaties. These are also costs of doing business in a global environment. Many companies underestimate the cost of globalizing their business operations because they are not familiar with the environmental characteristics discussed at the beginning of this chapter.

Making accurate estimates of costs in a global value chain is a big challenge for companies wishing to become more ‘global. Foreign Corrupt.Praetices _Act . In many countries, product costs also include expenses incurred to expedite official paperwork. Kenyan business executives refer to kitu kidogo (“something small”), the Chinese pay huilu, Russians shell out vzyatka, and Middle Easterners pay baksheesh. In dozens of countries around the world, bribery is part of doing business. In many countries. thisofficially sanctioned corruption IS not viewed as wrong or unethical. However, .U.S.based businesses are prohibited from influence peddling. The Foreign Corrupt Practices Act (FCPA). passed in 1977 and amended in 1986 by the U.S. Congress, prescribes fines and jail time for American managers violating its rules. Over the past 20 years, some U.S. companies have complained about the advantage experienced by international competitors who are not bound by the FCPA. Experiences in the past 5 to 10 years have changed international attitudes about the impact of corrupt practices on economic viability, In particular, the 1997-1998 Asian crisis wasblamed partly on graft and-influence peddling.

According to some estimates.’ corruption associated with doing business in China can add 5 percent to operating costs. Corruption can be so rampant that companies refuse to operate in some foreign locations, causing countries to lose valuable direct foreign investment. The International Monetary Fund and theworld Bank instituted policies in the 1990s to cut off funding to countries ignoring corrupt practices. In 1997, $292 million in loans to Kenya were suspended until policies and procedures to prevent corruption were instituted. Many of the recommended policies and procedures are modeled after the FCPA. The scope of the FCPA is very broad. Under FCPA rules, it is illegal for all U.S. companies, their affiliates, and their agents to bribe a govemrnent official. Criminal and civil prosecution can lead to fines of up to $2 million for the company and $100,000 for executives involved, with prison terms of up to five years. LO 7 ‘The FCPA has implications for accounting in two specific areas: record, keeping and Explain the Importance of the internal control procedures,

The act requires that all payments, including improper pay- Foreign Corrupt Practices Act. ments, be recorded and disclosed. Further, the act requires an adequate system of internal controls that maintains the integrity of the company’s assets, allowing only authorized personnel to-have access to them. The 1986 amendment to the FCPA distinguished between influence peddling, to motivate the awarding of business that WOUld,not otherwise have been awarded, and/aciUlating payments, to motivate officials to undertake actions more rapidly than they might otherwise. A facilitating payment might be given to , a customs official to expedite imported merchandise through customs, This latter type , of payment is not illegal under the act. Companies engaging iri globalization must ensure that their cross-border employees comply with the FCPA.