In the United States, a corporation is brought into existence under the laws of a particular state.

The state of incorporation is not necessarily where the corporation does business. Rather, a state often is selected because of the leniency of its laws regulating corporate Formation of.a Corporation activities.Indeed, many corporations conduct most-sometimes all-of their business activities outside the state in which they are incorporated.

The costs may include, for example, attorneys’ fees, incorporation fees paid to the state. and other outlays necessary to bring the corporation into existence. In the past, , these costs were charged to an asset account entitled Organization Costs. A recent change in accounting standards, however, now requires them to be charged to expense as . incurred.

Conceptually, organization’ costs are an intangible asset that will benefit the corporation over its entire life. But as a practical matter, corporations expense those costs immediately, even though they are’ usually spread over a five-year period for income tax Thus you will seldom see organization costs in the balance sheet of a Fictionalized corporation.

They have long since been amortized to expense. Rights of Stockholder. A.A corporation is owned collectively by its stockholders. Each . stockholder’s ownership interest is determined by the number’ of shares that he or she owns. Assume that a corporation issues 10,000 shares of capital stock. If you own 1,000 of these shares, you own 10% of the corporation. If you acquire another 500 shares from another stockholder, you will own J5%.Each stockholder receives from the corporation a stock certificate indicating the number of shares he or she owns. (An illustration of a stock certificate appears on the following page.)

The ownership of capital stock in a corporation’ usually carries the following basic rights:

1. To vote for directors and on certain other key issues. A stockholder has one vote for each share owned. The issues on which stockholders may vote are specified in the corporation’s bylaws.

Any stockholder-or group of stockholders-that owns more than 50% of the capital stock has the power to elect the board of directors and to set basic corporate policies. Therefore these stockholders control the corporation.

Beyond their voting rights, stockholders have no managerial authority unless they have been .appointed by the board to a management role.

2. To participate in any dividends declared by the board of directors. Stockholders in a corporation may not make withdrawals of company assets, as may the owners of unincorporated businesses. However, the directors may elect to distribute some or all of sheathing of a profitable corporation to its stockholders in the form of cash dividends. Dividends can be distributed only after they have been formally declared (authorized) by the board of directors.

Dividends are paid, to all shareholders in proportion to the number of shares owned.3.

To share in the distribution of assets if the corporation is liquidated. When a corporation ends its existence, the creditors must first be paid in full.

Any remaining assets arc divided among the shareholders again, in proportion to’ the number of ‘shares Publicly Owned Corporations. 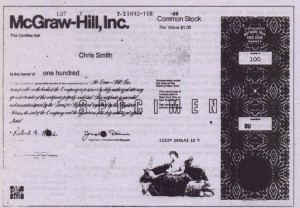 The capital stock of most large corporations can be bought and sold (traded) through organized securities exchanges.

As these shares are-available for purchase by the general public, these large corporations are said to be publicly owned. . Far more people have a financial interest in the shares of publicly owned companies than one might expect. If you purchase the stock of such a corporation, you become a stockholder with a direct ownership interrelates,  are u stockholder.