Following this sale, Mead’s inventory ledger would appear as follows:

Mead would assume that it first sold the  generators purchased on January 5 and then two of those purchased on February 5. Thus the total cost of goods sold ($4.400) would  include items at two different unit costs, as follows:

First In First Out Method

As the cost of goods sold always is’ recorded at the oldest available purchase costs, the units remaining in inventory are valued at the more recent acquisition costs.

Last In First Out Method

The last-in first-out method, commonly known as LIFO, is among most widely used methods of determining the cost of goods sold and valuing inventory. As the name suggests, the most recently purchased merchandise (the last in) is assumed to be sold first, If Mead were using the LIFO method, it would assume that the generator sold on March 1 was one of those acquired on February 5, the most recent purchase date. Thus, the cost transferred from inventory to the cost of goods sold would be $1,200

The journal entry to record the cost of goods sold is illustrated below along with the inventory subsidiary ledser record after this entry has been posted.

The LIFO method uses actual purchase costs rather than an average cost. Thus the inventory may have several different cost layers. If a sale includes more units than are included in the most recent cost layer, some of the goods sold are assumed to come from the next most recent layer. For example, if Mead had sold four generators (instead of one) on March I, the cost of goods sold determined under the LIFO assumption would be $4,600, as follows:

Evaluation of the Methods

Identical items will have the same accounting values only under the average- cost method. Assume, for example, that a hardware store sells a given size nail for 65 cents per pound. The hardware store buys the nails in lOO-pound quantities at different times at prices ranging from 40 to 50 cents per pound. Several”hundred pounds of nails are always on hand, stored in a large bin. The average-cost method properly recognizes that when.a customer buys a pound of nails it is.not necessary to know exactly ‘which nails the customer selected from the bin in order to measure the cost of goods sold. Therefore, the average-cost method avoids the shortcomings of the specific identification method. It is not necessary to keep track of the specific Items sold and of those still in inventory. Also, it is not possible to manipulate income merely by·selecting the specific items to be delivered-to customers.

The distinguishing characteristic of the FIFO method is that the oldest purchase costs are transferred to the cost of goods sold. while the most recent costs remain in inventory.

By assigning lower costs to the cost of goods sold, FIFO usually causes a business to report somewhat higher profits than would be reported under the other inventory valuation methods.’ Some companies favor the FIFO method for financial reporting purposes, because their goal is to report-the highest net income possible. For income tax purposes, however, reporting more income than necessary results in paying more income taxes than necessary.

Except for their effects on income taxes, the answer to this question is no.

During a period of rising prices, a company might report higher profits by using FIFO instead of ,LIFO. But the company would not really be any more profitable. An inventory valuation method affects only the allocation of costs between the Inventory account and the Cost of Goods Sold account. It has no effect on the total costs actually incurred in purchasing or manufacturing inventory. Except for income taxes, differences in the profitability reported under different inventory methods exist “only on paper”

The cash payments relating too-Inventory occur when suppliers are paid. In’ a statement’ of cash flows. these outlays are included among the cash payments for operating activities. For merchandising and manufacturing businesses, these payments usually represent the largest use of cash. It is important to note that inventory valuation methods have no effect on the cash paid to purchase or manufacture inventory. . They do. however. affect cash payments for income taxes.

The table below summarizes  the basic inventory valuation methods 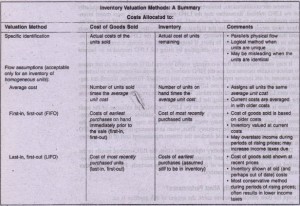 The Principle of Consistency

The principle of consistency is one of the basic concepts underlying reliable financial statements. This principle means that once a company has adopted a particular accounting’ method, it should follow that method consistently. rather. than switch methods from one year to the next. Thus, once a company has adopted a particular inventory flow assumption (or the specific identification method), it should continue to apply that assumption to all sales of that type of merchandise.

One advantage of a just-in-time system lies in reducing the amount of money tied up in inventories of raw materials and finished goods. Also, the manufacturing company does not need to maintain large inventory storage facilities. A disadvantage of a just-intime system is that a delay in the arrival of essential materials may bring manufacturing operations to a halt. Therefore.just-in-time scheduling of incoming materials is feasible

The just-in-time’ concept actually involves much more than minimizing the size of inventories. It has been described as the philosophy of constantly working to increase efficiency throughout the organization. One basic goal of an accounting system is to provide management with useful information about the efficiency-or inefficiency-of operations.