Among such events arc losses incurred because of strikes and the gains or losses resulting from sales of plant assets.

Such items, if material, should be individually listed as items of revenue or , -rather than being combined with other items in broad categories’ such as sales revenue or general and administrative’ expenses. In the income statement of Ross Corporation (page 515), the $80,000 loss resulting from’ the of H lawsuit was disclosed separately in the income simulcast hut was not listed as an extraordinary item. This loss was important enough to bring to the . attention of readers of the income statement, but  arc not so unusual or infrequent as to be considered extraordinary items.

Distinguishing Between the Unusual and the’ Extraordinary In the some corporate managements had a tendency to classify many losses as extraordinary, while classifying most gnin« as a part of normal, recurring operations. This resulted in reporting higher income before extraordinary .iterns, although this subtotal was often adjusted downward at the bottom of the income statement alter the loss was included. To counter this potentially misleading practice, the accounting profession now defines extraordinary items very carefully and intends for them to he quite rare.

A key question is whether the event is likely to happen again, considering the company’s environment. A farm located along the banks of the Mississippi River may, from time to time, incur flood damage: Even if these floods are, say, 10 years apart, the resulting losses would not be considered extraordinary. Such expected to happen again in the foreseeable future. Now consider a business located in San Francisco that sustains damage from an earthquake. Earthquakes do reoccur in this region, but the likelihood of one particular. 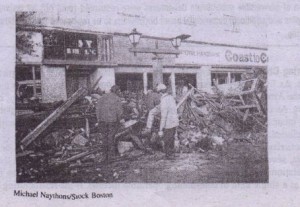 business sustaining material damage in multiple incidents is remote. Therefore, material damage caused by earthquakes generally is considered extraordinary. The same reasoning applies to tOIjf:¥oes and lightning-such events are not expected to strike twice
in the same place.

• There is no comprehensive list of extraordinary items. Thus the elassiflcatlon of a specific event is a matter of judgment. The. follo~ing table. is inlende.d to provide you with general guidance on how these judgments are made

Restructuring Charges : One important type. of unusual loss relates to restructuring of operations.

As indicated; previously. restructuring of operations has become a common aspect of the Americanization. In fact, the 1990s was labeled the decade .of corporate downsizing.

Restructuring charges consist of items such as losses on write-downs or sales of plant assets, severance pay for terminated workers, and expenses related to the relocation of operations and remaining personnel. They are presented in the company’s income statement as a single item in determining operating income. If the restructuring involves

To compute, this one-time “catch-up adjustment,” we recompute the income of prior years as if the new accounting method had always been ill use. The difference between this recomputed net income and the net income actually reported in those periods is the cumulative effect of the accounting change.

To illustrate, assume that Ross Corporation has been using the double-declining-balance method of depreciation but decides in the current year to change to the straight line method.

The company determines that if the straight-line method had always been in use, the total net income of prior years would have been $140;000 higher than was actually reported. This $140,000 is the cumulative effect of the change in accounting principle and is shown as a separate item in the current year’s income statement (following discontinued operations and extraordinary items.Jf any).

Depreciation expense in the current and future years’ income statements is computed by the straight-tine method. just asif this method had always been in use. Changes in Principle Versus Changes in Estimate A change in accounting principle refers to a change in the method used to compute financial statement amounts, rather than a change in the underlying estimates. For example, a switch from straight-line, to another method of computing depreciation is regarded as a change in accounting principle;

However. a change in the estimated useful life used in computing depreciation expense is a estimate. This distinction is an important one. When we charige an accounting

Posted on November 21, 2015 in Income and Changes Retained Earnings

Earning per Sharo (EPS)
REPORTING THE RESULTS OF OPERATIONS