For example, assume that the standard wage rate of a production worker in a furniture manufacturing company is $15 per hour. If the standard number of direct labor hours (DLH) allowed to produce a particular table is 3 hours, the standard direct labor. cost per table is $45 ($1S per DLH times 3 DLH). The setting of reasonable direct labor standards often requires input from personnel managers, industrial engineers, ‘union representatives, supervisors, cost accountants, and factory employees.

Some companies are allowing workers,to set their own standards by using time and motion techniques formerly used by industrial engineers.. Whim standards are set by Industrial engineers rather than by the workers themselves; workers pay scant attention to them. The Harvard Business Review (1993) reports that at the Toyota.

General Motors Oint-venture plant In Fremont, California, work teams standardize each task so that every member c if the team’ will perform, the task in the same way. Teams compare their actual results to standard as and to the actual results and standards created by other teams on other shifts. Team members periodically update standards when they find more efficient methods for achieving their tasks. 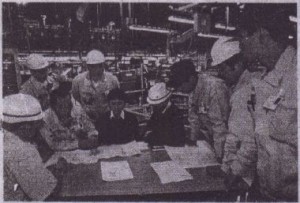 To illustrate the use of standard costs and the computation of variances, we will examine the operations of Brice Mills in Moscow, Idaho. Among the company’s major products are laminated wooden beams used in the construction industry.

The production process involves two steps. First, 2- inch by 12-inch boards of varying lengths are cut from rough white pine lumber supplied by wholesalers from throughout the Pacific Northwest.

These boards are then glued together. like a sandwich, to form a laminated beam. The more 2-inch ” by l2-inch boards used in the lamination, the stronger the . beam. One of the most common ·beams that Brice manufactures on a regular basis is 20 feet long and requires six . layers of pine boards. At normal capacity, the company produces’ 700 of these beams each month.

When finished, each beam contains 240 boat-a-feet of lumber. However, because of waste caused by knots, warps, cracks, and blade cuts, Brice allows 264 board-feet as the standard quantity for each 20-foot beam manufactured. The company’s standard cost of ,rough white pine is $0.25 per board-foot. Therefore, the standard cost of direct materials is $66 per beam (264 board-feet X $O.2S per foot). Converting rough lumber into-boards suitable-for finished beams requires a variety of direct labor tasks.

For instance, boards must be cut and planed, glued together, pressed, and coated witb a protective sealant. Brice has established a standard of 1.S direct labor hours for each beam it produces. Its standard labor rate is $12 per hour, resulting in a standard direct labor cost of $18 per beam. Let us now consider the standard overhead cost per beam. Manufacturing overhead includes both fixed and variable costs. Fixed manufacturing costs are those that are not affected by short-term changes in the level of production.

Examples include supervisors’ salaries, depreciation on machinery, and property taxes on the factory. Variable manufacturing costs, on the other hand, rise and fall in approximate proportion to changes in production volume.

The best examples of variable production costs are direct materials and direct labor. However, certain overhead costs also are’ variable, including machinery repairs and the amounts of electricity and indirect materials ‘(such as glue) used in production. Brice budgets total fixed overhead relating to the production of beams at $5,600 per month.

At the normal production level of 700 beams per month, ‘this amounts to $8 per, beam ($5,600 -+ 700 beams). In addition, Brice expects to incur $6 per beam in variable overhead. Thus the company’s standard cost for overhead’ is estimated at $14 per
unit. The following table summarizes the standard costs Brice expects to incur in the manufacture of its 20-foot beams. (Throughout this illustration, we show standard costs in red, actual costs in blue, and cost variances in black.