We first introduced the concept of depreciation in Chapter 3. We will now expand that discussion to address such topics as residual values, alternative depreciation methods,and depreciation (or cost recovery) for income tax purposes 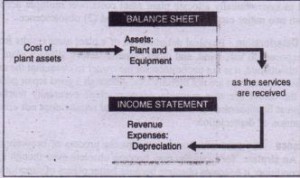 received, however, the cost of the truckgradually is removed from the balance sheet and allocated to expense, through the process of depreciation.

Separate Depreciation Expense and Accumulated Depreciation accounts are maintained for different types of depreciable assets, such as factory buildings, delivery equipment, and office equipment. These separate accounts help accountants to measure separately the costs of different business activities, such as manufacturing, sales, and administration:

Depreclatlon differs from most other expenses in that it does not depend on cash payments at or near the time the expense is recorded. For this reason, depreciation often is called a “noncash” expense. Bear in mind, however, that large cash payments usually are required at the time depreciable assets are purchased.

Plant assets are shown in the balance sheet at their book values (or carrying values). The book value of a plant asset is its cost minus the related accumulated depreciation. Accumulated depreciation is a contra-asset account, representing that portion of the asset’s cost that has already been allocated to expense. Thus book value represents the portion of the asset’s cost that remains to be allocated to expensein future periods.

The term obsolescence means the process of becoming out of date or obsolete. An airplane, for example, may become obsolete even though it is in excellent physical condition; it becomes obsolete because better planes of superior design and performance have become available

Both methods recognize the

You as a Business Owner

When an asset is acquired in the middle of an accounting period, it is not necessary to compute depreciation expense to the nearest day or week. In fact, such a computation would .give a misleading impression of great precision. Since depreciation is based on an estimated useful life of many years, the depredation applicable to anyone year is only an approximation.

Assume that S&G Wholesale Grocery uses straight-line depreciation with the half- . year convention. Depreciation on the $17,000 delivery truck with the 5-yearlife is summarized as follows:

The half-year convention enables us to treat similar assets acquired at different dates during the year as a single group. For example, assume that an insurance company purchases hundreds of desktop computers throughout the current year at a total cost of $600,000. The company depreciates these computers by the straight-line method, assuming a 5-year life and no residual value. Using the half-year convention, the depreciation expense on all of the computers purchased during the year may be computed as follows: $600,000 -;- 5 years x 0/12 = $60,000. Ifwe did not use the half-year convention, depreciation would have to be computed separately for computers purchased in different months

By far the most widely used accelerated depreciation method is called fixed-percentageof. decUning-balance depreciation. However, the method is used primarily in income. lax returns, rather than financial statements

Tax rules, however, often specify a lower percentage, such as 150% of the straight-line rate. This version of the declining-balance method may be described as “150%-declining-balance.