From a creditor’s viewpoint, the lower the debt ratio the better, since this means that stockholders have contributed a higher percentage of the funds to the business. and therefore the margin of protection to creditors against a shrinkage of the assets is high.

Secured Claims Sometimes the claims of long-term creditors are secured with specific collateral, such as the land and buildings owned by the borrower. In these situations. the secured creditors may look primarily to the value of the collateral in assessing the safety of their claims.

Analysis by Short-Term Creditors Bankers and other short term creditors’ share the interest of stockholders and bondholders in the profitability and long-run stability of a business. Their primary interest.

however is in the current position of the company-its ability to generate sufficient funds (working capital) to meet current operating needs and to pay current debts promptly.

Thus the analysis of financial statements by a banker considering a short-term loan. or by a trade creditor investigating the credit status of a customer. is likely to center on the working capital position of the prospective debtor.

Amount of Working Capital Working capital is the excess of current assets over current liabilities. It represents the cash and near-cash assets that provide a “cushion” of liquidity over the amount expected to be needed in the near future to satisfy maturing obligations.

The details of the working capital of Sea-cliff Company arc shown on the following page. This schedule shows that current assets increased $ 102,000. while current liabilities rose by only $18.000, with the result that working capital increased $84.000.
Quality of Working Capital In evaluating the debt-paying ability of a business. short-term creditors should consider the quality of working capital as well us the total dollar amount.

The principal factors affecting the quality of working capital are (I) the nature of the current assets and (2) the length of time required to convert these assets into ca sh. The schedule on page 640 shows an unfavorable shift in the composition of Sea-cliff Company’s working capital during 200 I: cash decreased from 13.9% to 9.7% of current assets. while inventory rose from 41.6% to 46.2%. Inventory is a less liquid resource than cash.

Therefore, the quality of working capital is not as liquid as in 20()O. Turnover rates (or ratios) may be used to assist short-term creditors in estimating the time required to turn assets such as receivables and inventory into cash.

Such detailed information. however, generally is not provided in annual financial statements. The trend indicated by this analysis is unfavorable. since the required for Sea cliff to turn over (sell) its inventory is  Companies that have low gross profit ruts often need high history turnover rate!’> in order to operate profitably.

This is merely another way of s,Tying Will if

The profit rate is low, a high volume of transactions is enclosure of profits. Companies that sell high markup items. such Series, can operate successfully with much 1OWl inventory Operating Cycle The inventory turnover rate indigent how quickly this asset converts into cash, Short-term creditors..are interested primarily in the company’s ability to genera

• The period of time required for a merchandising company till convert  inventory into cash is called the op railing cycle, Illustriousness uppercase 5 hilt is repeated below for your convenience. Radcliffe”s operating cycle in 200 I was approx incurably 1-15days. compute days required 10 turn over inventory aim the aver reacquired receivables. This compares 10 an operating cycle of coll days (NI. compute 96 days to dispose of the inventory plus 41 Jays to collect the insulting receivables. From the viewpoint of short-term creditors. the shorter the-operating cycle. the high of the borrower’s working capital. Therefore. these creditors would warlord the lengthening of Sea cliff Company’s operating cycle as perfunctorily trend 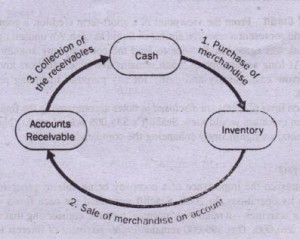