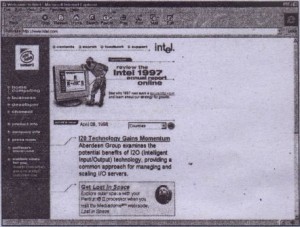 1. Explain how fixed, variable, and semivariable costs respond. to changes in the volume of business activity.
2. Explain how economies of scale can reduce unit costs.
3. Prepare a cost-volume profit graph .
4. Compute contribution margin and explain its usefulness.
5. Determine the sales volume required to earn a desired level of operating income.

It wasn’t too long ago that Intel Corp. executives were so dismissive of personal computers priced below ‘$1,000 that they called them Segment Zero–‘:’adumping ground for inventory close-outs and’bottom-feeding PC clones selling yesterday’s technology. Instead, Intel held to the·high ground, pushing pricey chips that could run the newest, coolest software. Not coincidentally, th~se chips helped produce the juiciest gross profit margins, some 60% overall, one of the highest in high tech

But that was last year-when the average PC was stili a pricey $2,000. In February, Compaq Computer Corp., changed everything when it became the first top tier PC maker to hawk powerful, dirtcheap computers. Using the Pentium-compatible Media GX chip from Intel rival Cyrix Corp., Compaq shipped a $999 Presario (thaf now sells for $799)-and the sub-$1,000 market exploded. Today, almost all big PC makers are pushing inexpensive gear, and sales in the segment have surged from just 7% of U.S. retail lnits in 1996 to an estimated 25% this year

To illustrate the relationships between costs and activity levels, we.will examine the operation ‘of McKinley Airlines, a small charter service based if I Fairbanks, Alaska. As some that the average monthly cost of operating the airline i.s $66,000. Obviously. in any given month, it would be mere coincidence if the company’s actual total cost exactly equaled $66,000. Indeed, many factors may cause its actual expenses to be more or less than the average. Throughout this chapter, we will discover the importance of determining which factors drive costs and how managers can use this information to improve their planning and control activities.

Having identified passenger miles us ail appropriate activity base, we will next classify each of the airline’s operating costs into one of three broad categories: fixed costs, variable costs, and semi variable costs.

Fixed costs are those costs and expenses that do not change significantly in response to changes in an activity base. McKinley’s depreciation expense is an example of a fixed cost, as the monthly depreciation expense docs not vary with the number of passenger miles flown. Depending on the nature of u purticular business, fixed costs can also include udrninistrutivc and executive salaries, property taxes, rents and leases, and many types of insurance protection

A variable cost is one whose total rises or falls in approximate proportion to changes in an activity base. McKinley’s fuel expense is an example of a variable cost, as it changes in approximate proportion to the number of passenger miles flown. For instance, if total passenger miles increase by 10% in a . given month, we would expect to see a similar increase in fuel expense

We have expressed these cost-volume relationships graphically in the following diagrams (for each cost type and in total). Carefully note the relationship between volume (monthly passenger miles flown) and cost in each diagram 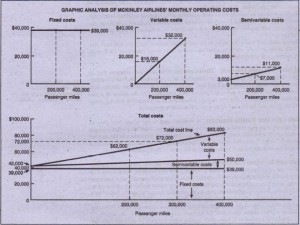 Note descres In cost per

The decrease in McKinley’s fixed cost per unit at higher levels of activity represents a more efficient use of the company’s productive assets-its aircraft. In general. most businesses can reduce unit costs by using their facilities more intensively. I These savings are .
called economies of scale. .

To illustrate, assume that an automobile plant incurs fixed costs of $8.4 million per month and has the capacity to produce 7,000 automobiles per month, The fixed cost per unit, manufactured is shown below at three ‘different levels or production.

Notice that by producing 7,000 cars per month, the automakcr’s manufacturing costs are $900 less per automobile than if the automaker produces only 4,000 cars each month ($2,100 – $1,200 = $900). This cost advantage results from fully utilizing the company’s production facilities’ and, therefore, spreading the company’s tixed costs over as many units as possible.

Economies of scale are most apparent in businesses with high fixed costs, such as airlines, oil refineries, steel mills, and utility companies. Most large companies automatically realize some economies of scale. This is one of the reasons why it is difficult for a small company ,to compete with a much larger one. But smaller companies also can realize their own economies of scale by using their facilities as intensively as possible.

Second, unusual patterns of cost behavior are most likely to occur at extremely high or extremely low levels of volume. For example, if output were increased to near 100% of plant capacity, variable costs would curve sharply upward because of payments for overtime. An extreme decline in volume, on the other hand. might require shutting down plants and extensive layoffs, thereby reducing some expenditures that are usually considered fixed costs. Most businesses, however, operate somewhere between perhaps 45% and 80% of capacity and try to avoid large fluctuations in volume. For a given business, the probability that volume wiIJ vary outside of a fairly narrow range is usually remote. The range over which output may be expected to vary is called the relevant range, as shown in graph (b). Within this relevant range. the assumption that total costs vary. in straight-line relation to changes in volume is reasonably realistic for most companies. 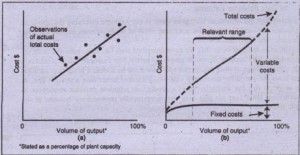 The Budget Period
BUDGETING THE BASIS FOR PLANNING AND C0NTROL