Having gained an understanding of various cost behaviors, we can now expand our discussion to include the relationships among costs (both manufacturing costs and operating expenses), revenue, and operating income as follows:

Before we proceed with an illustration, one last point must be emphasized. The term profit in cost-volume-profit analysis refers to operating income, not net income. This is because income taxes and non operating gains and lose. do not possess the characteristics of variable costs ‘or fixed costs Cost-volume-profit analysis tells managers very little about cash flow effects. Revenue, for example, could be either cash sales or accounts receivable sales; However, cash flow information can be Important In CVP analysis when an activity that causes cash to vary significantly is a cost driver. Consider a company seiling two products. Product A iS,primarily cash-based sales and product B results in long-term holdings of outstanding accounts receivable balances. Managers may decide to include a cost in product Bis CVP analysis representing the lost opportunity to earn a return on the cash tied up in the accounts receivable balance.

Assume that ProGlide Skate Company manufactures high-quality in-line skates. The company currently sells its product to wholesale distributors in California, Washington, and Oregon. Because of the rapid growth in the popularity of in-line skates, the company is considering distributing to several East Coast wholesalers as well. Although wholesale prices vary depending on the quantity of skates purchased by a distributor, revenue consistently averages $90 per pair of skates sold. ProGlide’s monthly operating statistics are shown below.

Preparing and Using a Cost-Volume-Profit Graph

The cost-volume-profit (or- break-even) graph on the following page is based on ProGlide’s cost and revenue statistics. The graph shows the reader, at a glance; the break even point in units and in dollars. 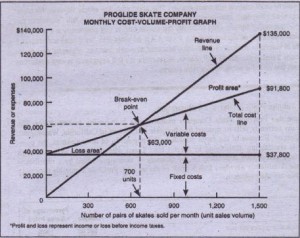 The horizontal ‘axis represents the activity base, which for ProGlide is pairs of skates  sold per month. Since the company is not equipped to manufacture more than 1,500 units, per month, this is assumed to be the upper limit of the relevant range. The vertical axis of the graph represents dollars of revenue and costs corresponding to various levels of unit sales activity. The steps in .drawing this graph are as follows

How Many Units Must We Sell?

The concept of contribution margin provides a quick means of determining the unit sales volume required for a business to break even or earn any desired level of operating income. Knowing the break-even sales volume cari be of vital importance. especially to companies deciding whether to introduce a new product line. build a new plant. or in some cases, remain in business

To illustrate the relationship between sales volume and contribution margin. assume that we want to compute how many pairs of skates ProGlide must sell in a month to break even. From the cost-volume-profit graph on page 834. we can see that the answer is 700 units. We will oow prove that this is so. At the break-even point, the company must generate a total contribution exactly equal to its fixed costs. The data on page 833 show that monthly fixed costs amount to $37,800. Given-a contribution margin of $54 from each pair of skates. the company must sell 700 pairs per month to break even, as follows

For example. how many pairs of skates must ProGlide sell in order to earn a monthly operating income of $5,4oo