Assume that a business operates a single retail store in a town in which the major employer-is a steel mill. What would happen to the collectibility of the store’s accounts receivable if the steel mill were to close, leaving most of the store’s customers unemployed? This situation illustrates what accountants call a concentration of credit risk, because’ many of the store’s credit customers can be affected
in a similar manner by certain changes in economic conditions. Concentrations of credit risk occur if a significant portion of a company’s receivables are due from a few major customers or from customers operating in the same ‘industry or geographic region.

The FASB requires companies to disclose all significant concentrations of credit risk in the notes accompanying tncir financial statements. The basic purpose of these disclosures is to assist users of the financial statements in evaluating the extent of the company’s vulnerability to credit losses stemming from changes in specific economic conditions

Accounts receivable usually do. not bear interest. When interest will be charged, creditors usually require the debtor to sign a formal promissory note. Accounting for notes receivable and interest charges is discussed in Supplemental Topic B at the end of this chapter

Early in this chapter, we summarized the valuation of financial assets in the balance sheet  The following table summarizes the reporting of transactions involving these assets In the income . statement and any cash effects to be presented In the statement of cash flows. Note that most of these transactions have no cash flow effects. 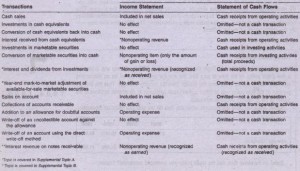 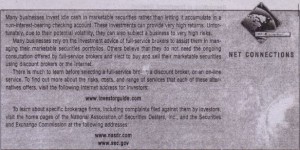 There are four basic accountable events relating to investments in marketable securities:

(1) purchase of the investments.
(2) receipt of dividend revenue and interest revenue.
(3) sales of securities owned. and (4) end-of-period mark-to-market adjustment

Investments in marketable securities originally are recorded at cost, which includes any brokerage commissions. I To illustrate, assume that Medeo purchases as a short-term investment 4,000 shares of the capital stock of AT&T. The purchase price is $50 per share, plus a brokerage commissi~n of $800. The entry to record the purchase of these shares is

Marketable Securities is a controlling account. representing the balance sheet value of all of MedCo’s short-term investments. Medeo-like most investors-also maintains a marketable securities subsidiary ledger, with a separate account for each security owned. (Notice the computation in the explanation of our journal entry of the $50.20 cost per share. This amount will be used in computing any gains or losses when MedCo sells some of these investment shares.)

Most investors recognize interest and dividend, revenue as it is received. Thus -the entries involve a -debit ,to Cash and a credit to either Interest Revenue or Dividend Revenue.

To illustrate. assume that Medeo receives an $0.80 per share dividend on its 4.000 shares of AT&T. The entry to record this cash receipt is: ‘

When an investment is sold. a gain or it loss often results. A sales price in excess of cost produces again. whereas a sales price below cost results in a loss.

Sale at a Price Resulting In a Gain To illustrate. assume that Medeo sells 1.000 shares of its AT&T stock for $55 per share, less a brokerage commission of $200. The entry would be:

This transaction results in a gain because Medeo sold the shares at a price above cost. The gain-s-representing the profit on the sale-increases, Medeo’s net income for the period. At the end of the period. the credit balances in any gain accounts are closed into the Income Summary account, along with the credit balances -of the revenue accounts. ‘

Sale at a Price Resulting in a Loss

Assume that several months later. Medea sells another 1.000 shares of its AT&T stock, this time at a price below cost The sales price is $48 per snare. again less a brokerage commission of $200. The entry would be

In a multiple-step income statement, interest revenue, dividend revenue, and gains and losses  sales of investments usually appear as non operating ‘items, after the determination of income ‘from operations.

A promissory note is an unconditional promise in writing to pay on demand or at a future date a definite sum of money.

A formula used in computing interest is as follows

Interest rates usually are stated on an annual basis. For example, the total interest charge on a $100,000, one-year, 12% note receivable is computed as follows

If the term of the note were only four months instead of one year, the total interest revenue earned in the life of the note would be $4,000, computed as follows

In making interest computations, it is convenient to assume that each month has 30 days. Thus a year has 360 days and each month represents YI2 of the year. As these assumptions greatly Simplify the computation of interest and assist students in focusing on the underlying concepts, .we.will use them in our illustrations and assignment’ material. I . If the term of a note is expressed in days, the exact number of days in each month must be considered in determining the maturity date of the note. The day on which a note is dated is not counted, but the date on which it matures is. Thus a two-day note . dated today matures the day after tomorrow.

In most fields of business, notes receivable are seldom un countered; in some fields they occur frequently and may constitute an important part of total assets. In banks and financial institutions, for example, notes receivable often represent the company’s largest asset category and generate most o~ the company’s revenue.  retailers that sell on installment plans, such as Sears, Roebuck & Co., also own large amounts of notes receivable from customers

Assume that on December I a 90-day, 12% note receivable is acquired from a customer, Marvin White, in settlement of an existing account receivable of $30,000. The entry for acquisition of the note is as follows:

At December 31, the end of the company’s fiscal year, the interest earned to date on  notes scceivable should beaccrued by an adjustingentry as follows:

To simplify this illustration, we will assume our company makes adjusting entries only at year-end. Therefore, no entries are made to recognize the interest revenue accruing during January and February.

On March I (90 days after the date of the note) the note matures. The entry to record collection of the note will be:

Collection of principal and interest

The preceding three entries show that interest is being earned throughout the life of the note and that the interest should be apportioned between years on a time basis. The revenue of each year will then include ~he interest actually earned in that year.

If the Maker of a Note Defaults

A note receivable that cannot be collected at maturity is said to have been defaulted by the maker. Immediately after the default of a note, an entry should be made by the holder to transfer the amount due from the Notes Receivable account to an account receivable from the debtor.

To illustrate, assume that on March I, our customer, Marvin White. had defaulted on the note used in the preceding example. In this case. the entry on March I would have been:

Notice that the interest earned on the note is recorded through the maturity date and is included in the account receivables from the maker. The interest receivable on a defaulted note is just as valid a against the maker as is the principal amount of the note.

In past years some companies sold their notes receivable to banks in order to’ obtain cash prior to the maturity dates of these notes. As the banks purchased these notes at a “discount” from their maturity values, this practice became known as discounting notes receivable.

The Decision of Whether to Accrue Interest.

The concept of interest accruing from day to day applies not only to notes receivable but to all interest-bearing investments (such as cash equivalents and bonds) and to interest-bearing debt. But in our discussions of cash equivalents and marketable securities, we stated that investors generally recognize interest revenue as it is received. In accounting for notes receivable, why did we accrue the interest earned, instead of recognizing revenue as cash was received?

The answer lies in the concept of materiality. Interest does, in fact, accrue from day to day. But the interest revenue earned from cash equivalents and investments in marketable securities usually represents only a small part of the investor’s total revenue. In short, it usually is not material in relation to other financial statement amounts. Thus the principle of materiality often justifies investors’ accounting for this revenue in the most convenient manner.

Most notes receivable, however, are owned by financial institutions. For these businesses, interest revenue is material. In fact, it generally is the company’s primary source of revenue. In these circumstances, greater care must be taken to assign interest revenue to the period in which it actually is earned .

Posted on November 23, 2015 in Financial Assets