The Cash Budget
Using NTl’s financial budget estimates from Schedules B/ through 88, the cash budget that follows is developed for the first two quarters of 2000:

NTI’s budgeted cash position for the first two quarters of 2000 is a vast improvement over its actual cash position at the end of 1999. We have discussed two primary reasons for the anticipated turnaround. First, a new policy was developed to improve control of
inventory management and production scheduling. Second, ambitious goals were established to tighten credit policies. Keep in mind that these cash figures are based completely on budget estimates. Thus only if management’s estimates and expectations are realistic will the company’s cash flow problems be resolved.

Budgeted Balance Sheets
We now have the necessary information to forecast NTI’s financial position at the end of each of the next two quarters. The company’s budgeted balance sheets are shown on the following page. The budget schedules used to derive various figures are indicated parenthetically.

Using Budgets Effectively
In preparing a budget, managers are forced to consider carefully all aspects of the company’s activities. This study and analysis should, in itself, enable managers to do a better job of managing.The primary benefits of budgeting, however, stem from the uses ,made of budgeted information. Among these benefits are (1) advance warning of and assignment of responsibility for conditions that require corrective action, (2) coordination of activities among all departments within the organization, and (3) the creation of standards for evaluating performance. Let us consider how NTI’s master budget serves these functions.

Advance Warning of and Responsibility for Decision Making Earlier in this. we described NTI’s financial condition as.profit rich, yet cash poor. We attributed this condition to the rapid sales growth experienced in the fourth quarter of 1999. In short,

a sudden surge in demand for NTl’s product caused excessive amounts Jf cash to become tied up in inveritories and receivables. As a result, one of management’s major responsibilities at the start of 2000 is generating enough cash flow from operations to meet
obligations as they become due. Had a master budget been prepared in 1999, management would have been forewarned of this condition, thereby making the severity of the current situation less threatening to the company’s survival.

Coordination of the Activities of Departments The budget provides a comprehensive plan enabling all of the departments to work together in a coordinated manner. For ex William C. Almonds, “Frank Astronaut’s Secret? Call It.Empower Steering,” Business Week, May I, 1995 pp.63-65.

A Yardstick for Evaluating Management Performance The comparison of actual results with budgeted amounts is a common means of evaluating performance in organizations, As discussed in Chapter 21, we learned that the evaluation of performance should be based only on those revenues and costs that are under the control of the person being evaluated. Therefore, for the purposes of evaluation, budgeted fixed costs should be  subdivided
into the categories of controllable costs and committed costs.

Performance may become difficult to evaluate if the actual level of activity (either sales or production) differs substantially from the level originally ,budgeted. A flexible budget is one that can be adjusted easily to show budgeted revenue, costs, and cash flows
at different levels of activity.

Thus, if a change in volume lessens the usefulness of the original budget, a new budget may be prepared quickly to reflect the actual level of activity for the period. To illustrate the usefulness of a flexible budget, ‘assume that on March 31, 2000, Joe Reco (NTJ’s production manager) is presented with the performance report shown below. The report compares the manufacturing costs originally budgeted for the quarter (Schedule A4, page 941) with his department’s actual performance for the period.

At first glance, it appears that Reco’s performance is quite poor, as all production costs exceed the amounts budgeted. However, we have deliberately omitted one piece of information from this performance report: To meet a higher-than-expected customer demand for NTI’s product, the production department produced /,500 units instead of the /,000 units originally budgeted for the first quarter. Under these circumstances, we should reevaluate our conclusions concerning Reco’s ability to control manufacturing costs. At this higher level or production, variable manufacturing costs should naturally exceed the amounts originally budgeted. In order to evaluate his performance, the budget must be adjusted to indicate the levels of cost that should be incurred in manufacturing 1,500 units.

Flexible budgeting may be viewed as combining the concepts of budgeting and cost volume profit analysis. ‘Using the variable and fixed cost estimates from Schedule A3 (page 940), the manufacturing cost budget for NTI may be revised to reflect any level. 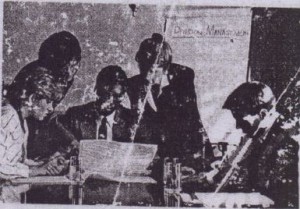 of production. For example, in the following schedule. these relationships are used to forecast quarterly manufacturing costs at three different levels of production:

Notice that budgeted variable manufacturing costs change with the level of production, whereas budgeted fixed costs remain the same. We can now modify the performance report for Nl’I’s-production department to reflect the actual 1.500 unit level of production achieved during the first quarter of 2000. The modified report is presented on the following page.

This comparison paints quite a different picture from the report presented above.

Considering the actual level of production, the production manager has kept all manufacturing costs below budgeted amounts, with the exception of fixed overhead (most of which may be committed costs).

The techniques of flexible budgeting may also be applied to profit centers by applying cost-volume-profit relationships to the actual level of sales achieved.