As a general rule. the period covered by a budget should be long enough to show the effect of management policies but short enough so that estimates can be made with reason able accuracy. This suggests that different types of budgets should be made for different time spans.

Capital expenditures- budgets. which summarize plans for major investments in plant and equipment. might be prepared to cover plans for as long as 5 to 10 years. Projects such as building 11 new factory or an oil refinery require many years of planning and expenditures before the new facilities are ready for use.

Most operating budgets and financial budgets cover a period of one fiscal year. Companies often divide these annual budgets into four quarters, with budgeted figures for each quarter.

This process assures that the budget is reviewed at least several times each year and that the budgeted figures for the months just ahead are based on current conditions and estimates.

In addition. budgeted figures for relatively short periods of time enable managers to compare actual performance to the budget without waiting until year-end.

The Master Budget: A Package of Related Fidgets

The “budget” is not a single document. Rather, the master budget consists of H number of interrelated budgets that collectively summarize all the planned activities of the business. The elements of a master budget ‘vary depending on the size and nature of the
business. A typical master budget for a manufacturing company would include the following:
1. Operating budgets a. Sales forecast b. Production schedule (stated in units to be produced) c. Manufacturing cost budget ‘
d. Cost of goods sold budget and ending inventory budgets e. Operating expense budget
2. Capital expenditures budget
3. Budgeted financial statements
a. Budgeted income statement b. Cash budget c. Budgeted balance sheet Describe the elements of a master budget.

Some elements of the master budget are organized by responsibility center. The budgeted income statement, for example, indicates the budgeted revenue and expenses each profit center. The cash budget shows the budgeted cash flows for each cost center as well as each revenue center. 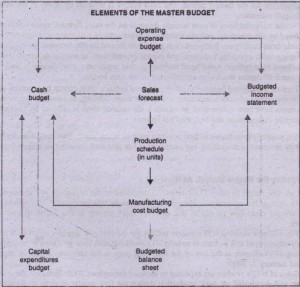 nest and economic conditions, and expected levels of competition. A forecast of the expected level of sales is a prerequisite to scheduling production and to budgeting revenue and, variable costs, The arrows in our budget diagram indicate that information
“flows” from this forecast into several other budgets

4. Prepare a cash hudget. The cash budget is a forecast of the cash receipts and cash payments for the budget· period. The cash budget is affected by many of the other budget estimates.The budgeted level of cash receipts depends on the sales forecast, credit terms offered by the company, and the company’sexperience in collecting accounts. receivable froin customers Budgeted cash payments depend on the forecasts of manufacturing. costs, operating expenses, and capital expenditures, as well as the credit terms offered by suppliers. Anticipated borrowing, debt repayment, cast. dividends, and issuance of capital stock also are reflected in the .cash budget.

5. Prepare a budgeted balance .sheet. A projected balance sheet cannot be prepared until the effects of cash transactions on various asset, liability, and owners’ equity accounts have been determined. In addition, the balance sheet is affected by budgeted capital expenditures and budgeted net income.The capital expenditures budget covers a span of many years, This budget is continuously
reviewed and updated, but usually it is 110tprepared anew on~n annual basis.

Preparing the Master Budget: An Illustration

Ler US now return to the NTI illustratiou.introIuced nt the beginning of the Even though the company’s first year of opeations was profitable, it experienced significant cash flow problems due to rapit sales growth in the fourth quarter of 999. We will now develop NTI’s master budget for the first two quarters. A primary objective of this process is to help NT! avoid the cash now problem experienced during \999. Shown at the top of the following page is the company’s sheet, dated January’ I, 200.0 Sales of NTI’s product are expected to increase throughout 2000. However. the company will drastically cut back production during the first quarter in order to liquidate Nome of the finished goods inventory currently on hand -As of January I. there is no work in process inventory. No capital expenditures are planned for 2000.

The first step in preparing NTI’s master budget is to develop each of its operating budgets for the first two quarters of 2000. Information from these budgets will be used to prepare budgeted quarterly income statements. All of the information needed to estimate
budgeted income from operations comes from the operating budget estimates. For easy reference to these budgets throughout the remainder of the chapter, we refer to them as Schedule Ai through Schedule A7.

The Sales Forecast (Schedule A1) Bob Poole, NTI’s marketing director, is optimistic that demand for the company’s product will continue to grow in 2000, He estimates that sales will reach 8,000 units in the first quarter and 10,000 units in the second quarter. Sales estimates for the third and fourth quarters are 30,000 units and 40,000 units, respectively. To keep its product affordable to a wide range of users, NTI is committed to holding its selling price per unit at $75 throughout the year. On the basis of this information, the following sales orecast prepared:

Production Schedule (Schedule A2) Upon examining performance reports for 1999, Joe Reeo, NTl’sproduction manager, concluded that he had overreacted .:to the rapid ,sales growth experienced in the fourth quarter. As a consequence, the co,?pany was car.

rying an excessive inventory of finished goods at the start of 2000. He immediately adopted a new policy for 2000 to increase inventory turnover and improve operating cash flows. The number of units in the finished goods inventory will now be held to 10% of the unit sales volume anticipated in the following quarter.